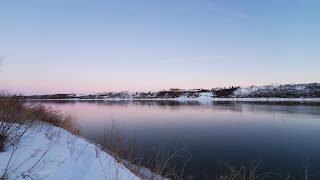 your majestic name fills the sky

you have set your glory high

but here in our days

God's mindfulness brings them near 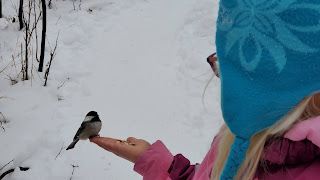 Posted by Darlene Klassen at 2:44 PM No comments:

we walk at dusk
heads thrown back
to search the darkening sky
for emerging pinpoints of light
tell-tale tracks of sunshine
from distant spheres
mars first, shining orange
high in the eastern sky
jupiter plays with our eyes
flashing like a diamond in the sky
till we are certain
and then we wait for saturn's
light to reach us
two walking along spadina
peering into the southern horizon
two swinging through the sky
out of step enough that they will slip
in and out of each other's arms
in the next month
if you walk outside at dusk
you can watch them emerge
before the rest of the heavens shine
their night lights into our sky
by 6:30 those two are bright in the south-west
every night they swing closer
till Dec 21 when they may
(I've never seen this)
look like a single star
every night the stars
sweep across our sky
as we spin
planets sweep through
on their own orbit
spinning into new
constellations
as we all fly
around the sun
perhaps I am telling you things
you already know
but I am walking down spadina
as the colors rise and fade
with the setting of the sun
finding new patterns
in pinpoints of light
and he tells me
we have been married for
one saturnian year 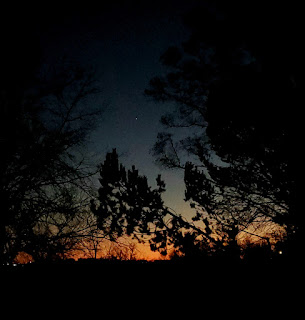 Posted by Darlene Klassen at 8:31 AM No comments:

the November morning sun slants
long and bright into my window
green cedars wave in the breeze
discarded poplar leaves
caught in lilac's dense branches
gladiola stems stubbornly
standing tall and green
with iris spears
'we're not dead yet!'
wanting to play banjo but do not pick it up
did not yesterday or in the many days before
longing for You
but sometimes I skirt along the
shoreline
content to gaze at reflections, find
a sign
of Your presence and
design
rather than plunge into deep water
gulping wine 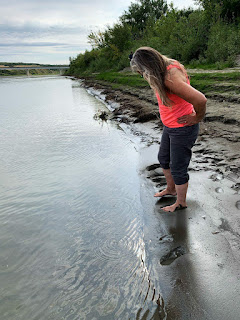 Posted by Darlene Klassen at 10:09 AM No comments:

re-examining a day for rest... 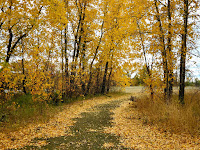 So many childhood pathways
lay unexamined, unmaintained.
Now the tracks of an adult
wandering on the same
journey fall uneasily
into well-worn patterns.
What if you want to walk them this time
with a grandmother's pace?
Light 2 candles
when you see 3 stars
or when you reach the amphitheater
or when you reach home
on Sunday afternoon.
Walking by a different light-
a candle's light, a star's light,
the light of 2 more generations.
Reframing work
by rest
by freedom
by calling.
Redeeming a day.
Letting seeds of redemption scatter into our lives
week by week by week.
The kingdom of God is like seed thrown on a field...
Posted by Darlene Klassen at 3:26 PM No comments:

scrabble
and the babble
of siblings
playing with words

through the neighborhood flung
breathes - exhales into my lungs

Posted by Darlene Klassen at 2:45 PM No comments: 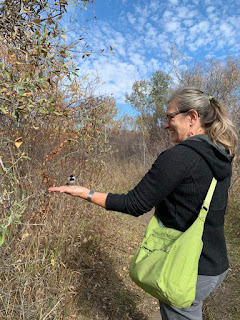 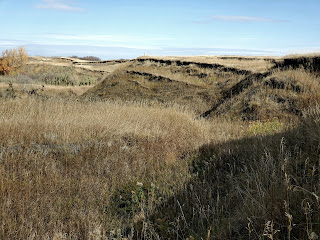 but this
swishing
in the grass
at my feet
twisting
disappears
wolf willow shines
in the afternoon sun
sparkles like diamonds
in the October sun
silver among the gold
of the prairieland sun
Posted by Darlene Klassen at 8:28 AM No comments:

late to the sour dough adventure

So I know that sour dough bread has been a thing in these pandemic months ... but my sister-in-law brought a jar of starter with her when she came to visit, and the thing entered my kitchen for the first time.  During their visit she created  amazing waffles, and cinnamon buns, and then left me with my own starter when they went back home.

Irene has always been a cooking influence in my life.  We've spent time in her kitchen watching her study her recipes, following or adapting, meticulously chopping and pulling together such amazing feasts over the years.  So I watched her, and she talked through things as she worked. And then she began to write her tips onto the backs of papers that held Evelyn and Rick's painting originals.  "Adventures with sour dough, by Irene". 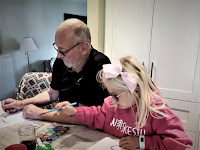 I had watched her tend that starter, carefully feeding and stirring (no metal, except a fork or whisk to stir), refrigerating or leaving on the counter depending on what she was making or when.

Lid on, or lid off and covered with a towel.

Jar on the counter, jar in the fridge, or jar in a bowl so it didn't overflow.

Opening the lid, looking at the bubbles, smelling the thing, deciding if it was "ripe".

If you know anything about me at all, you know that I am not all that nurturing of things inside my house.  If you are in my house, and you are a plant or other non person (and my dear husband may have grounds to claim that this lack of nurture extended in his general direction as well ... you are good, right?  Don't have to take care of you do I?).

However.  It comes from Irene. so... it bears some consideration.

I take the jar out of the fridge in the evening.  Get the bubbles going over night.

I look at it in the morning.  Sure is bubbling.  Smells like something ripe.  Kind of yeasty sour and sweet.  By evening the bubbles have sunk and it smells more yeasty and sharp.  Now I try to do the discard and feeding math and it is too late.  My brain has deeply carved trails of baking with yeast. I understand my oatmeal brown bread.  But this sourdough requires much more of me.  Not sure I want to give that.

I give up for the day.  I feed the thing again in the evening. And go to bed.

In the morning I discard some, and feed them all. add things to it. let it sit for 30 minutes.  put it into a dutch oven and let it sit 30 more minutes (or a bit more. or a bit less. depends ...) then do the stretch and fold thing.  No kneading this needy bread.  Then leave it at room temperature till it doubles in size.  anywhere from 3-12 hours.  depends on the temperature of the room and the happiness of the sourdough.

At 5 pm I decide that ready or not, that dough is getting shaped into a ball.  So.  Pull the edge up, fold, and turn. Repeat.  Flip over, and shape into a ball.  It just keeps sagging though - texture feels as though I didn't add enough flour.

I did not buy a scale for the ingredients ... as true sourdough lore requires.  A scale is more acurate.  Oh well.  let's see this experiment through to the end.

Back into the dutch oven (a cast iron pot we bought almost 30 years ago, and for all of those years have used only for camping ... now its coming into the kitchen for sour dough bread).  Cast iron pot is liberally sprinkled with corn meal. (See? I can follow directions!)  Rise another 30 minutes. or a bit more.

We all survived this first sour dough adventure, and the starter is back in the fridge where it only needs to be fed every 5-10 days.  I'll cut the loaf open this evening with some beef and barley soup.  I was not able to mathematically co-ordinate the ending of the sour dough baking last night with the beginning of supper.

It keeps a bit of Irene in my kitchen, and that is always a good thing.

Anyone want some starter? 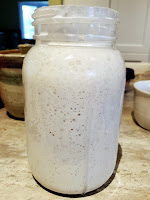 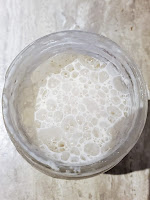 Posted by Darlene Klassen at 10:03 AM No comments: