time with a toddler

The woodpecker wasn't a bit shy as she landed on the newly shorn poplar
and began her hunt for bugs.
Following the ridges upward,
a light knocking sound corresponded with the bird's head bobbing
... eventually helping a 1 1/2 year old find what his grandma was pointing at.

We whispered, and followed her, and she quietly keep looking for food;
not immediately flying away,
but pecking and knocking her way to the far side of the tree
- away from these two who insisted on following her.
Eventually she tired of us and flew off.

time with a toddler ... attending to life 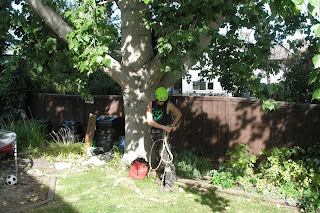 This was a pruning week. 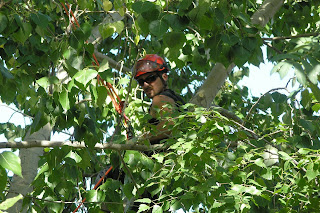 On Tuesday morning, two young men with hard hats, climbing gear and saws, swung themselves up into the branches of our poplar and disappeared into the foliage.


They climbed to the top (where crows, blue jays and an occasional sparrow hawk have perched to survey this part of my world), cutting off the smaller branches and limbs that were growing off the main trunk and getting in their way.  Once they reached the top, they attached climbing ropes to stable upper branches, anchoring themselves as they swung wider and farther to trim and cut.

I heard the cracking and snapping of twigs and branches before they littered the ground underneath.  The ground showed evidence of the work long before you could see a difference in the branches.

A little painful, the pruning of my poplar was.
Things are not quite as they were.
The sunlight is a little harsher on the west side of the yard.
The tree looks a little barren, but clean. 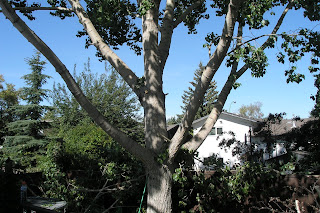 My Lord said,
"I am the true vine, and my father is the gardener.
He cuts off every branch in me that does not bear fruit,
while every branch that bears fruit he prunes so that it will be even more fruitful.
[pruned if you do, and pruned if you don't ... either way, we get pruned!]
You are already clean because of the word I have spoken to you.
Remain in me, and I will remain in you.
No branch can bear fruit by itself; it must remain in the vine.
Neither can you bear fruit unless you remain in me."
Posted by Darlene Klassen at 11:13 PM No comments: