fantail in the chapel

light shifts and drifting leaves
grow still grow quiet
the winter snow falls, lifts
in the wind as everything sleeps

New Zealand slips into my world as our plane flies around earth's generous curve, crossing time zones, skipping through winter to land on a long luxurious humid summer day. 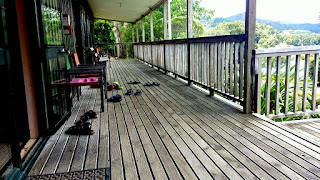 The wrap around deck in Paparoa
was waiting for me, and I found myself reading Tolkien in the rain, writing in the morning sun, watching a completely new world of son, of bird song and flight.  (At dusk we often heard the strangely familiar sounds of wild peacocks!)

One evening a bird sound from behind me surprised me. Joel informed me that a little fantail often comes into the chapel in the evenings.  They leave the doors and windows open, so she has discovered that she can freely fly in and out.

I followed her sounds and found her flitting around the drums and music stands; watched her for a while before returning to my chair on the deck.

The wind blows whereever it pleases. You hear its sound, but you cannot tell where it comes from or where it is going.  So it is with everyone born of the Spirit.

Posted by Darlene Klassen at 10:11 AM No comments:

the echos carry a beauty forward
that help us remember

I've been thinking this morning about that cloud of witnesses
while looking at skies with clouds that billow, scatter, gather, storm, stretch
from horizon to horizon

This cloud of witnesses ... 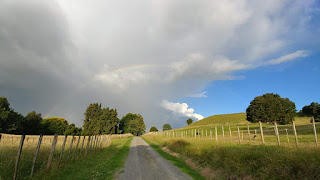 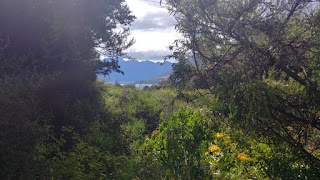 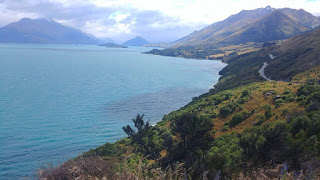 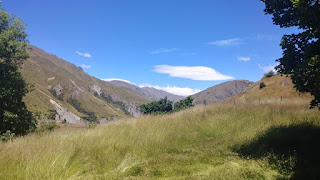 Posted by Darlene Klassen at 3:42 PM No comments:

He stamped our paper and sent us to the agriculture imports desk where an official from behind the computer told us he'd just check.
"Do you have an agriculture transport permission certificate?" (or whatever the thing is called...)
"No." (And I thought - but I know someone who does!  The Solar Gardens succulent guys have been certified to bring things in.  They know what they can bring.)  Probably wouldn't help.

"Sorry.  You can't bring lupine seeds."
It's just that they do grow in Canada - we saw them blooming in the ditches around Nelson that spring when we picked up our son after his year of woodworking.  And now they were gloriously blooming all along the river that we followed to Macetown, the gold mining ghost town just outside of Queenstown.  And I've had them in my own garden.  They sprouted up for several years in what is now my raspberry patch - just the leaves.  It was not a sunny spot so they never grew to flower.  Till one spring I moved a couple of them into my front garden and one of them bloomed beautifully for a few years.  Then died back and ceased.  A few years later, I spotted a new lupine seedling.  I carefully moved it into a location that was taken over by snapdragon seeds and I left it there to gather strength and sunlight for the next summer.  Except that I forgot that it was there and in the spring when I was cleaning up the spent snap dragon plants I inadvertantly pulled the lupine as well.

So I wanted to bring home New Zealand lupines.  They are to me the signs of my sons thriving.

(How much of this conversation has played out in my own heart and how much of it I spoke out loud to the gentle agriculture gate keeper who had to make me give up the lupine seeds I will not tell you!)

"Sorry.. No lupine seeds. We'll pull your bags from the plane and you'll have to dig them out."
(I know.  Should have kept them in our carryon ... but that all turned out to be helpful.  And that is another story.)

Funny thing.  In several of the places where the lupines were growing rampantly we caught glimpses of patches of orange.  Someone had brought in orange lilies as they built their homes on the mountainside, beside rivers and gold mines.
We waded through the rivers of lupines, and the clear sparkling Arrow river to get a better glimpse of them ... and there they were, thriving along a river that had such beautiful glittering rocks, surrounded by pink and purple and occasionally salmon colored and white lupines.  And pink dianthis. And some rose campion.

We also brought tshirts with fantail birds, and New Zealand sheep wool and manuka honey and books ... but I had looked forward to planting those lupine seeds.

Guess what I'll be hunting for in the Saskatoon greenhouses this spring?  I'll be finding lupines.
Thanks Luke and Lisa, for the wonderful adventure! 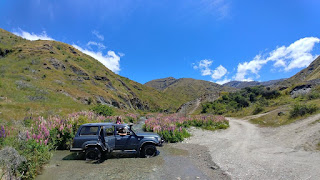 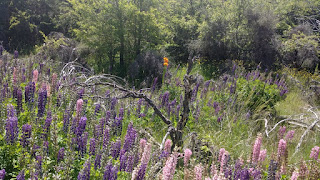 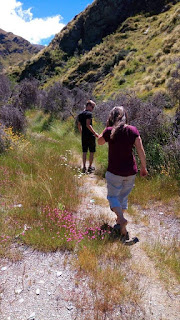 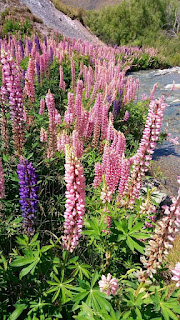 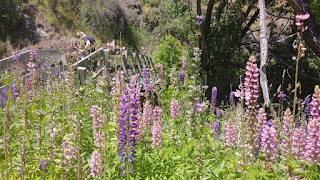 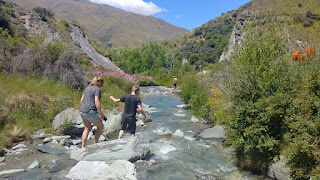 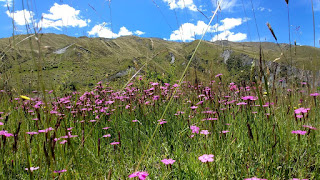 Posted by Darlene Klassen at 2:39 PM No comments: